The last tests are currently underway at West Metro phase one stations, including rescue exercises, already conducted at the Tapiola and Koivusaari stations. The most recent exercise was carried out on four days in late April in Lauttasaari by a total of eight rescue units and some 30 firefighters.

“Before the actual exercise begins, the metro train is driven to a predetermined location either at the station or in a tunnel and smoke machines and rescue dummies are placed in position. We review the rescue scenario and the course of the exercise,” says Jani Pitkänen, Fire Chief at Helsinki City Rescue Department, in charge of the exercise.

The exercise in April was about preparing for a metro car fire at the station.  A total of six dummies were to be rescued, three from a car at the end of the train, two from the second car and the last one from the metro exit corridor.

“The exercises involve 75 percent of technical systems testing and 25 percent training for our own firefighters. We conduct as extensive tests as possible of the technical equipment supporting rescue operations and seek to find possible hidden defects,” says Pitkänen.

Rescue exercises are arranged at all stations before they can be opened for use.

“In actual fact metro fires are highly unusual even on a global scale. This practice is about a situation in which either a technical fault or another sudden event ignites a violent fire on board a metro train,” says Pitkänen. 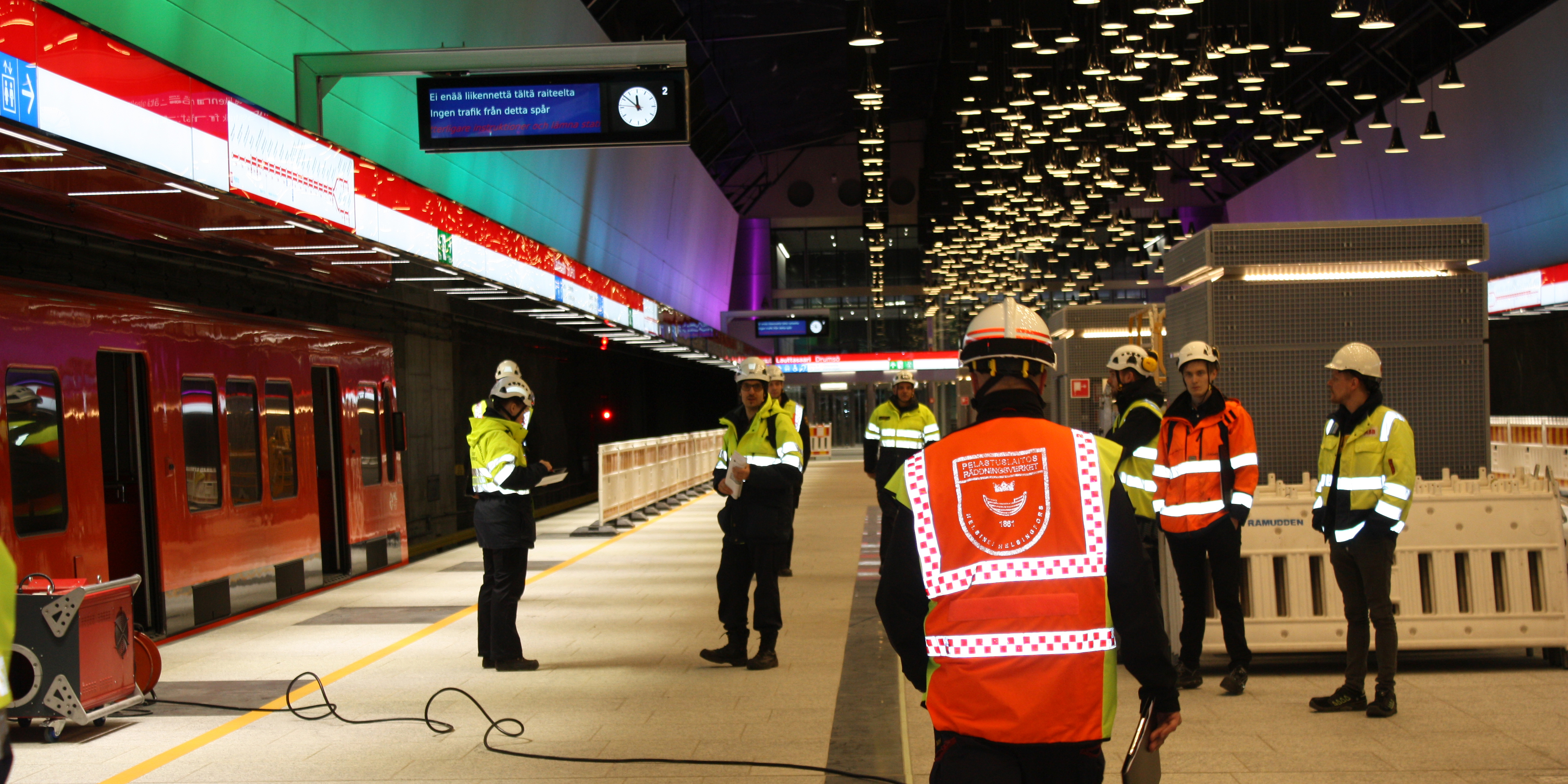 Smoke extraction blows the smoke away

The fire scenario created for the exercise is as realistic as possible to enable the rescue department to test the functionality of the station and its own skills. The exercise begins with smoke machines blowing white artificial smoke onto the platform. This smoke is harmless to humans but it blocks visibility effectively so that very soon, the other end of the platform cannot be seen.

The smoke will slowly fill the metro car driven to the station, where the dummies to be rescued are situated.

The actual alarm will be given by the HKL metro driver participating in the exercise. Soon, the alarm announcement will reverberate around the station in three languages, Finnish, Swedish and English: “Use the nearest exit, please follow the green exit signs.”

The automatic smoke extraction that starts at the same time will remove the smoke screen quickly. Water will stream from nozzles on both sides of the metro car as the extinguishing system, customised for metro trains, is activated. 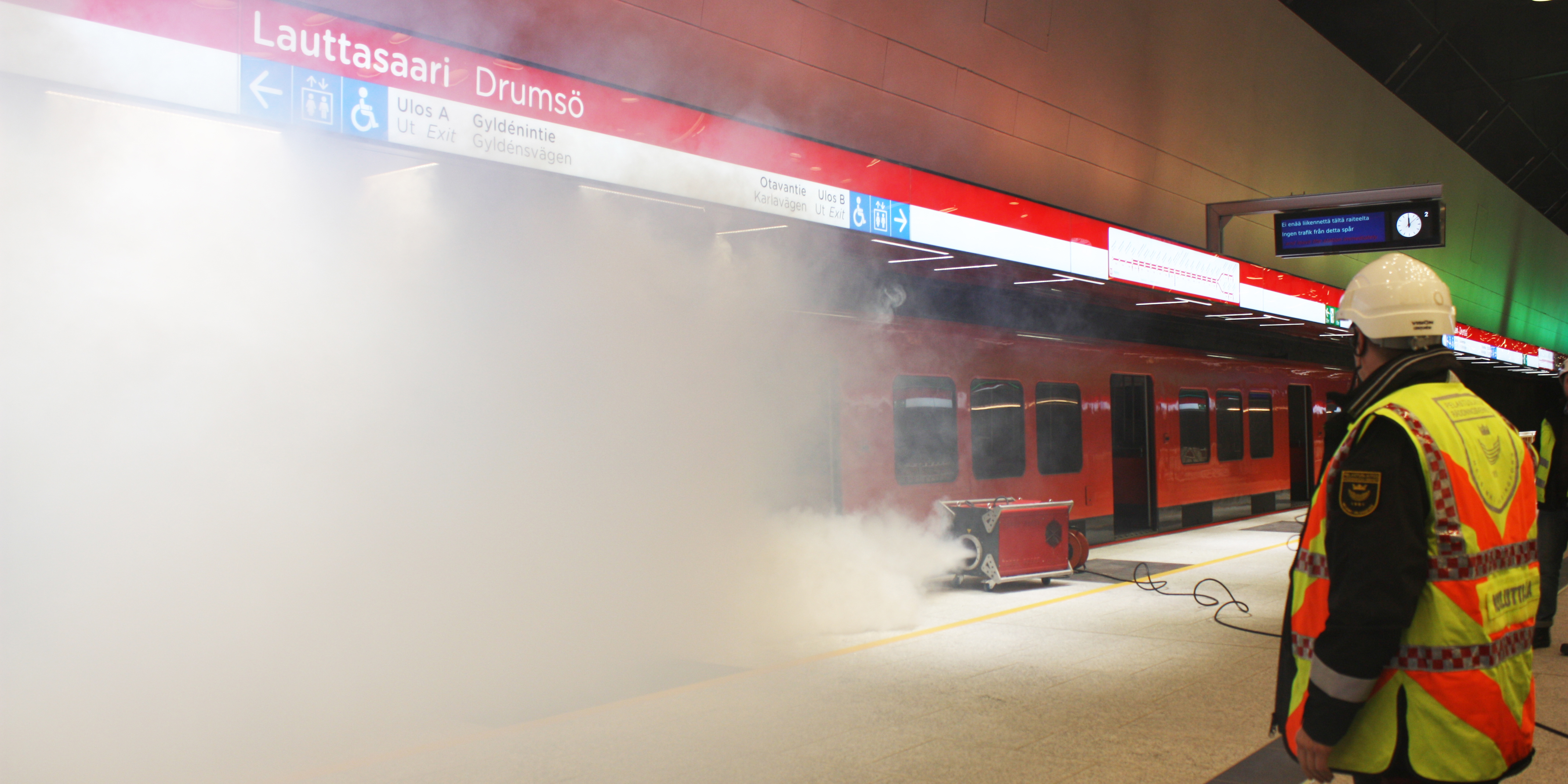 To safety along the escalators or in evacuation elevators

The doors to escalators will close automatically when the alarm starts – passengers will be able to use them for exiting but the doors close to prevent smoke from escaping from the platform. Only the ascending escalators are functioning to prevent anyone from accidentally descending towards the fire on the platform.

The rescue arrangements also accommodate passengers with reduced mobility, as there is an evacuation elevator at both ends of the station for those who are unable to use the escalator. As soon as the elevator receives the alarm, it will automatically run to the level where the fire is and will not open until it reaches a safe exit level.

There is a special elevator for the exclusive use of firefighters for rescue purposes. 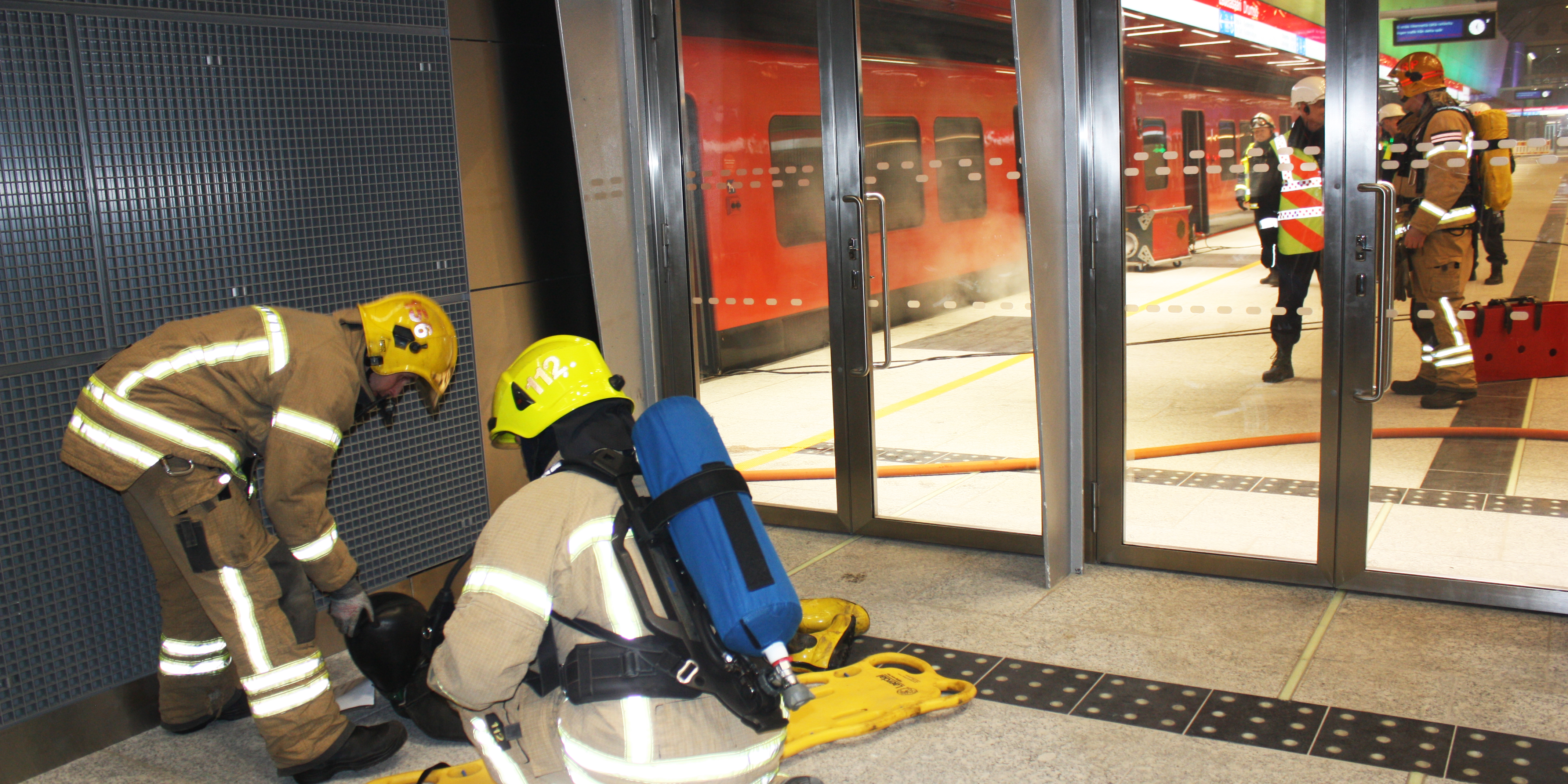 The weight of rescue dummies equivalent to real humans

Patients during the exercise are dummies who will first be taken into as safe space which the fire cannot reach, which in this case is the smoke-free area behind the escalator doors.

A firefighter carrying a dummy says into the radiophone: “Assistance for carrying required here.” The dummies weighing 70–80 kg correspond to real humans. During the exercise, one dummy is carried by at least two rescuers.

The firefighters bend down to the dummies and tie them onto the stretchers as if they were real patients. There is no time to lose, however, as the laminated info labels attached to the dummies indicate that some of the patients are seriously injured.  The emergency care staff present would help in a real situation.

The firefighters lift the stretchers up promptly and carry them towards the nearby evacuation lifts next to the escalator. 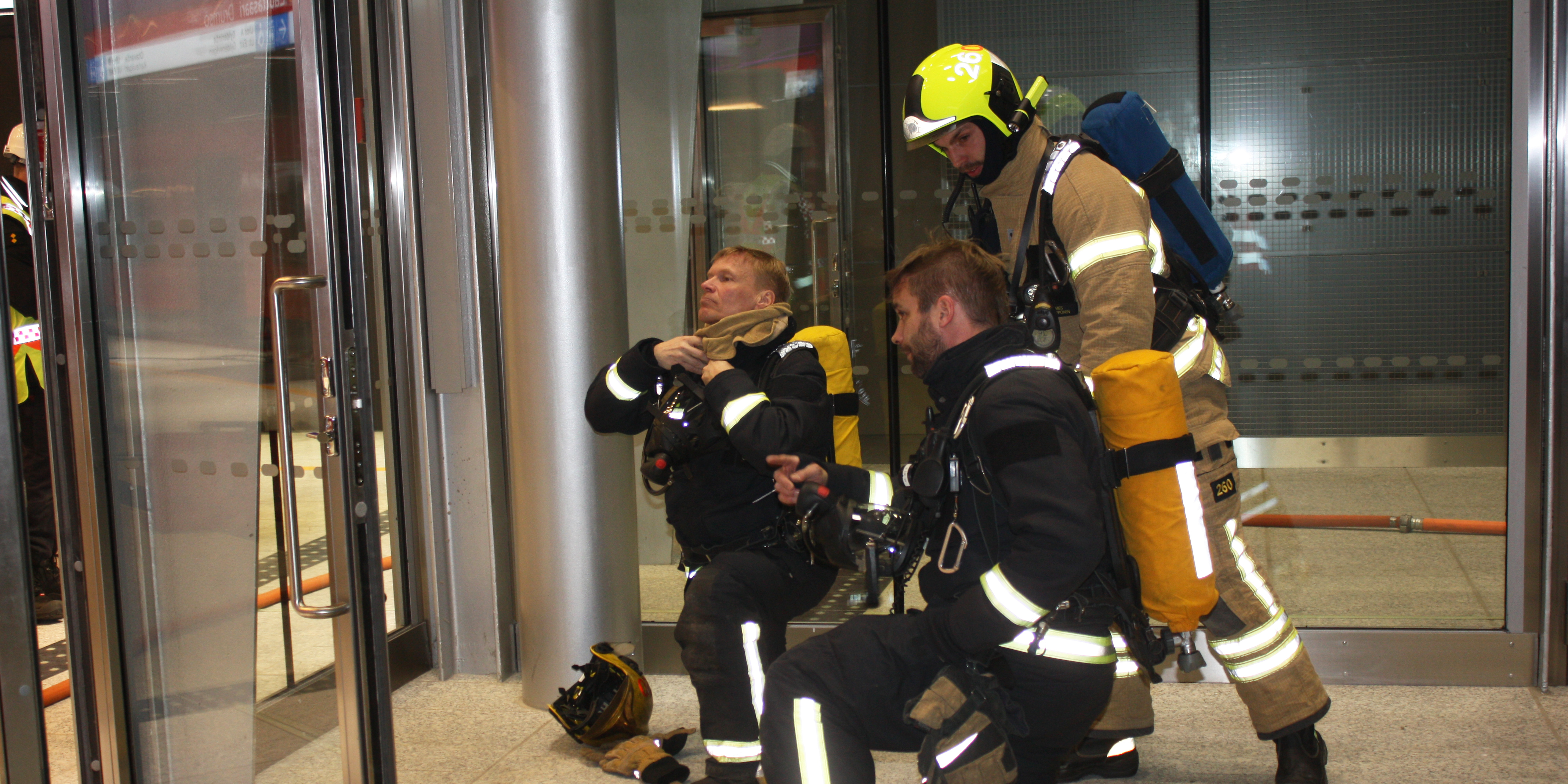 Once the dummies are safely in the elevators and station halls, the situation on the platform has calmed down. The smoke has cleared and control room staff is negotiating which metro shaft to use for ventilating the smoke. In a real situation, ambulances would meet the patients at the station, but now rescue department vehicles already surround the station.

Finally, the running of the exercise is reviewed with all participants. The firefighters take off their helmets and focus on listening to Jani Pitkänen who led the exercise.

“All in all, well done! Thanks everyone,” says Pitkänen.