Netel Oy has won the GSM, VIRVE and WLAN system contract for West Metro’s Matinkylä–Kivenlahti section. The contract is valued at around EUR 2.2 million. 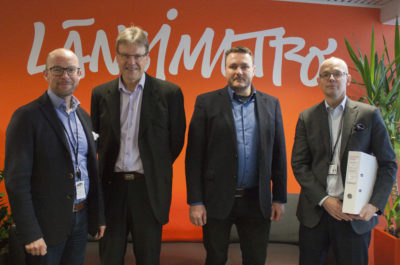 The project will create antenna networks to serve commercial mobile operators, the Finnish authorities’ network VIRVE and the city’s WLAN network. The radio network contract incorporates the installation and the majority of the materials. Installation will be carried out in the parallel metro tunnels over seven kilometres of rail line, at five stations and in the service tunnels.

“Netel was already involved in the construction of West Metro’s Ruoholahti–Matinkylä section. They have demonstrated their ability to create a high-quality end result in challenging circumstances,” says Länsimetro Oy’s Technical Director Raimo Kaunismäki.

The system contract is one of 24 subcontracts that extend throughout the metro line. The work is set to start immediately and will be completed by the summer of 2021.

“The second phase of West Metro is a critical project for us and it will further increase Netel’s market share in designing and building internal networks,” says Netel’s CEO Ari Asikainen.

West Metro’s second phase is estimated to reach completion in 2023. The excavation work was finished last year. The rail line and five stations have moved on to the construction phase, which is proceeding according to schedule. HVAC and electricity work is already ongoing at the Sammalvuori depot.

Up until 2022, construction will continue at the stations and on the rail line after which we will move on to the commissioning phase, which includes the acceptance of contracts, a comprehensive testing phase and approvals by public authorities. Länsimetro Oy will have completed its task when the metro is handed over to the operator so that preparations for transit operations can begin.