The second entrance to the Tapiola metro station, located on the south side, will be opened to the public on 4 March 2019. At the same time, the new bus terminal for connecting traffic will be inaugurated, and the Merituulentie road will be opened for traffic. With these changes, Tapiola will become more accessible to people.

“For those us who are involved in the construction work, the introduction of the Tapiola metro station’s second entrance meant expanding the metro’s systems to cover the new entrance. These systems include the safety automation, automatic smoke ventilation and over-pressurising systems, fire alarms, sprinklers, elevators, escalators and the announcement system,” says the West Metro project’s Project Manager Perttu Tavia.

Taking an entrance into use calls for careful testing of each system: first every metro system was tested individually, and in the final stage all the systems were put through joint test runs to ensure their flawless interaction.

“When compared to the commissioning of the metro in 2017, the biggest difference was that now we had to test the safety automation at night time to avoid causing disturbances in the metro traffic. The schedule was tight, since the nightly break in metro traffic only lasts about five hours. In the mornings, we also had to leave enough time for restoring the systems in the operational section following the tests. This meant that we had some 2.5 hours of effective testing time per night,” Tavia explains.

The head of the joint test runs was the West Metro project’s Janne Ilkanheimo.

“I organised the joint test runs. I invited the necessary partners from among the contractors, engineers and Länsimetro, established the schedule and made sure that we are ready for testing, because certain construction and testing phases had to be completed for us to be able to proceed to the joint test runs. I was also in charge of the actual tests, which covered announcements, elevators, escalators, smoke ventilation, hatches and doors, through both sensory methods and monitoring from the control room. All in all, it took three weeks of night shifts,” Ilkanheimo says.

“Our site supervisors and experts are true professionals, and they have really gone the extra mile here,” says Tavia.

Länsi-Uusimaa Rescue Department carried out fire inspections for the entrance before it was commissioned.

“The result was good. We paid attention to exit safety, fire alarms and smoke ventilation, lighting, announcements, and the functioning of elevators and escalators in the event of a fire. The inspections are familiar to us from when the phase one of the West Metro was taken into use. We also perform fire inspections for all of the metro stations during the year,” says Fire Chief Heikki Kervinen. 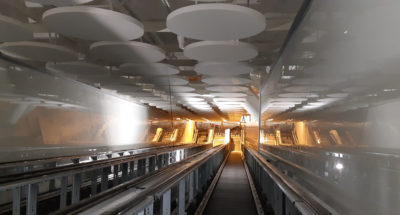 A worksite within a worksite – logistical and interface challenges

The fact that the route to the new entrance runs through the bus terminal caused a special circumstance during the construction work. The entrance worksite was located within another worksite.

“There were a number of interfaces and a lot of coordination to do. Logistics was also a challenge, since we could not use cranes, instead, all the construction supplies had to be carried in manually. Coupling the systems with each other also required expertise,” Tavia says.

The systems are largely related to safety.

“During the tests, I was personally impressed by the safety of our metro. Every possible scenario is accounted for,” says Tavia.

Although the entrance construction site was physically small, its effects were more extensive.

“We had to, for example, install long stretches of cabling in the operational metro section,” Tavia says.

The entrance was completed in collaboration. SRV took care of the building technology work as part of the Tapiola development project, and with HKL, who operates the existing metro, we carefully planned exceptional arrangements. The progress of the tests was closely monitored at HKL’s (Helsinki City Transport) Herttoniemi control room.

“As a result of the testing, the new entrance now functions as it should. Reconciling everything was quite an effort, but all’s well that ends well. Thanks to careful preparations for the joint test runs, the individual tests ran smoothly,” says Ilkanheimo.

“I feel privileged to have been involved in such a project. The worksite itself was small, but the impacts span the entire metro,” Tavia concludes.