Systems testing will ensure that all of the 52 different systems installed in the West Metro function safely and as planned under all conditions. The systems are like the West Metro’s nervous system, transmitting messages from various functions to the metro’s brain, i.e. HKL’s control room in Herttoniemi. Information must also travel from the control room to the functions. The systems testing will begin with point testing on single components and progress to the testing of larger entities, such as functions, systems and stations, as well as testing between stations and testing of the entire metro infrastructure. 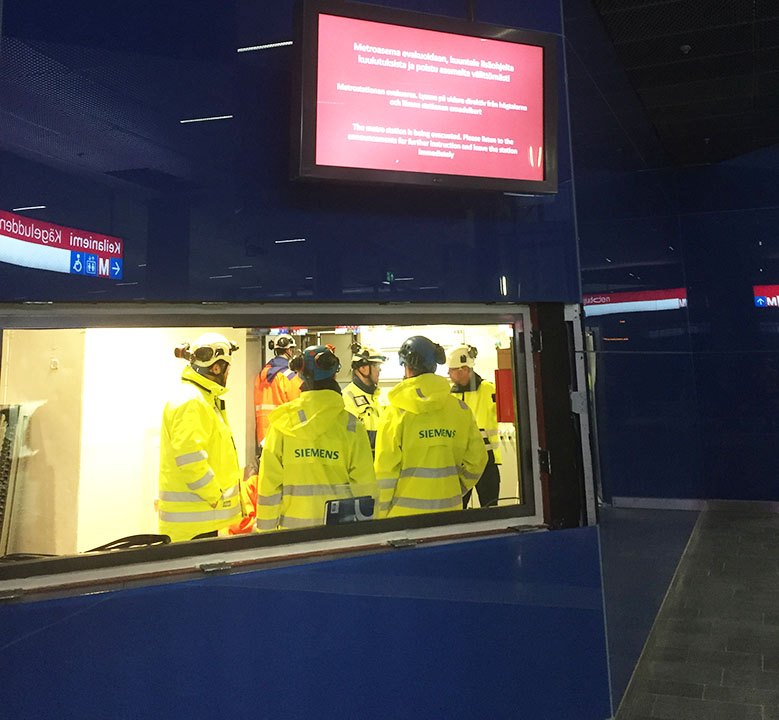 In the testing phase, point testing (I/O tests) will be carried out first. These tests will ensure that all of the individual devices, meters and components of the 52 different installed systems have been installed correctly and work as planned. The tests are an important part of quality assurance, and without them, a modern public transport system could not be opened to traffic.

Point testing involves making sure that each input and output message functions properly. The signal must travel from the device to the system’s centre and from the centre to the device. The signal must be traced from the device to the device’s centre located inside the station, and from there to the local control room, and finally to HKL’s control room in Herttoniemi. There are tens of thousands of points along the Matinkylä–Kivenlahti metro section. The first point tests at a metro station were carried out at the Kaitaa station in May 2020. HVAC control equipment was the first to undergo point testing. The testing phase at the Sammalvuori depot has already been wrapped up, and construction has been completed.

Since the spring of 2020, it has been possible to follow on the Construction web pages, from the War Room, the progress of a few key construction projects and installations at the stations and on the rail line, as well as read about some of the installations that have been completed. A new feature on the Construction pages is the possibility to keep track of the progress of the testing. Point testing of the HVAC automation system and the building technology supervision system are the first to be monitored in the War Room in terms of testing. As the testing proceeds, new entities to be monitored will be included.

Caverion Suomi Oy is in charge of installing, testing and commissioning the HVAC automation system on the West Metro’s Matinkylä–Kivenlahti section.

A total of 9,900 point tests will be carried out on the HVAC automation system. By the end of February 2021, some 5,150 tests had been performed. The point tests of the HVAC automation system will involve testing the connection between the installed devices on the Matinkylä–Kivenlahti section and the control room. For example, the functioning of the ventilation’s fire dampers will be tested, and it will be verified that when the fire damper is open/closed, the signal travels and the information is displayed correctly in the control room. When closed, the fire dampers prevent smoke from spreading through the ventilation, for instance, in the event of a fire. There are several hundred fire dampers along the Matinkylä–Kivenlahti section.

Hitachi ABB Power Grids is in charge of the installation, testing and commissioning of the West Metro Matinkylä–Kivenlahti section’s building technology supervision system. The system will enable the real-time and remote monitoring of the metro stations, metro line and maintenance tunnels, emergency exit shafts, station doors, elevators, escalators, lighting, smoke extraction and alarms, from the control room. The system will also set off automatic alarms and measures in emergency situations.

A total of 23,000 point tests are being carried out on the building technology supervision system. By the end of February 2021, some 14,140 tests had been carried out. The point testing will ensure that the signals of the installed building technology supervision device end up in the right place in the control room’s database and monitor. At the same time, the tests will also ensure that the message travels from the control room to the device. In practice, the point testing verifies whether the temperature, flow and smoke sensor information is displayed correctly in the control room.

Testing ranges from single points to the metro’s entire infrastructure

Once the point tests are completed, operational tests will cover single functions, for instance, the operation of ventilation, and systems testing will ensure that the systems function as planned, for instance, that the ventilation can be adjusted as indicated in the plans. These tests are followed by adjustments and measurements in which, for example, air flow is adjusted, and measurements are taken to determine whether the ducts contain the correct volume of air flow. This stage is followed by station-specific test runs to see, for example, whether the building technology supervision system works with the station’s other systems. The station-specific tests are followed by tests to ensure the functions between the stations, such as the functioning of the fire-extinguishing water line at the stations and on the rail line. Finally, how the stations function in different emergency situations, such as fires, floods and power outages of different durations, is tested. Some of the tests involve the metro train’s control system, and these tests are carried out again in conjunction with the other metro systems.  We will provide more information on the different phases of the testing as the tests proceed.

The Matinkylä–Kivenlahti construction project will wrap up after testing and official inspections, when Länsimetro Oy simultaneously hands over all five stations and the rail line infrastructure to the traffic operator HKL in 2023. The joint local authority Helsinki Region Transport (HSL) will decide when metro traffic can begin.