The refurbishment of the Koivusaari metro station’s floor has been completed and the metro station will be re-opened to passengers on 6 August. The station will be opened when morning traffic commences. The first train from Koivusaari will leave the station in the direction of Vuosaari at 5:21 a.m. on 6 August. The timetables of all of the metro trains running from Koivusaari are already available on HSL’s Reittiopas service, alongside the other timetables. 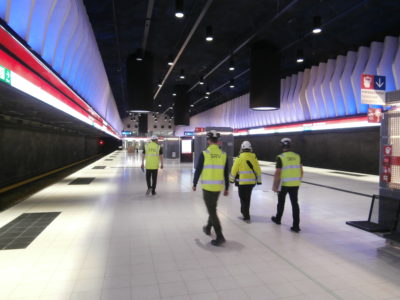 The floor refurbishment was carried out at the station due to cracks detected in the platform area’s floor surface material. The floor refurbishment project proceeded according to schedule. In June, the old flooring was removed, while ensuring that metro traffic could continue amidst the dusty demolition work. After Midsummer, the installation of the new flooring was begun in the platform area. In conjunction with the installation, photoluminescent strip indicators used in the West Metro were installed at the station to assist visually impaired people. The work was completed at the end of July.