Smoke extraction fans for the Matinkylä-Kivenlahti section will be supplied by Spanish manufacturer Talleres Zitrón S.A. The total contract price is EUR 1.8 million.

Operation of the smoke extraction fans was tested on the first phase of the West Metro by means such as passenger rescue drills before metro service was begun. The 52 different systems of the West Metro guarantee passenger safety at all times, including emergencies. High-performance smoke extraction fans exhaust smoke quickly through the correct routes to ensure that passengers can be evacuated safely.  In the West Metro, the movement of passengers between tunnels has been facilitated by, for example, constructing fire compartmented connecting tunnels in intervals of some 150 meters and by equipping both tunnels with prefabricated concrete units whose covers that serve as emergency exits.

The second phase of the West Metro is estimated to be completed in 2023. This year, work has progressed from excavation to construction.  The project management contractors for all five stations and the rail line have been selected, and construction will begin at all stations by the end of the year. On the rail line, some 360 supporting wall elements have already been installed over a distance of 1.5 kilometres. The tendering of subcontracts will continue until summer 2019. At the Sammalvuori depot, work has already progressed to technical building services.

Construction on the stations and rail line will continue until 2022, after which the project will proceed to the commissioning phase. This includes the acceptance of contracts, extensive testing and regulatory approvals. Länsimetro’s share of the project will be completed once the metro is handed over to the operator to begin preparations for passenger traffic. 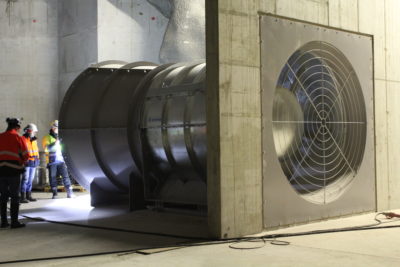